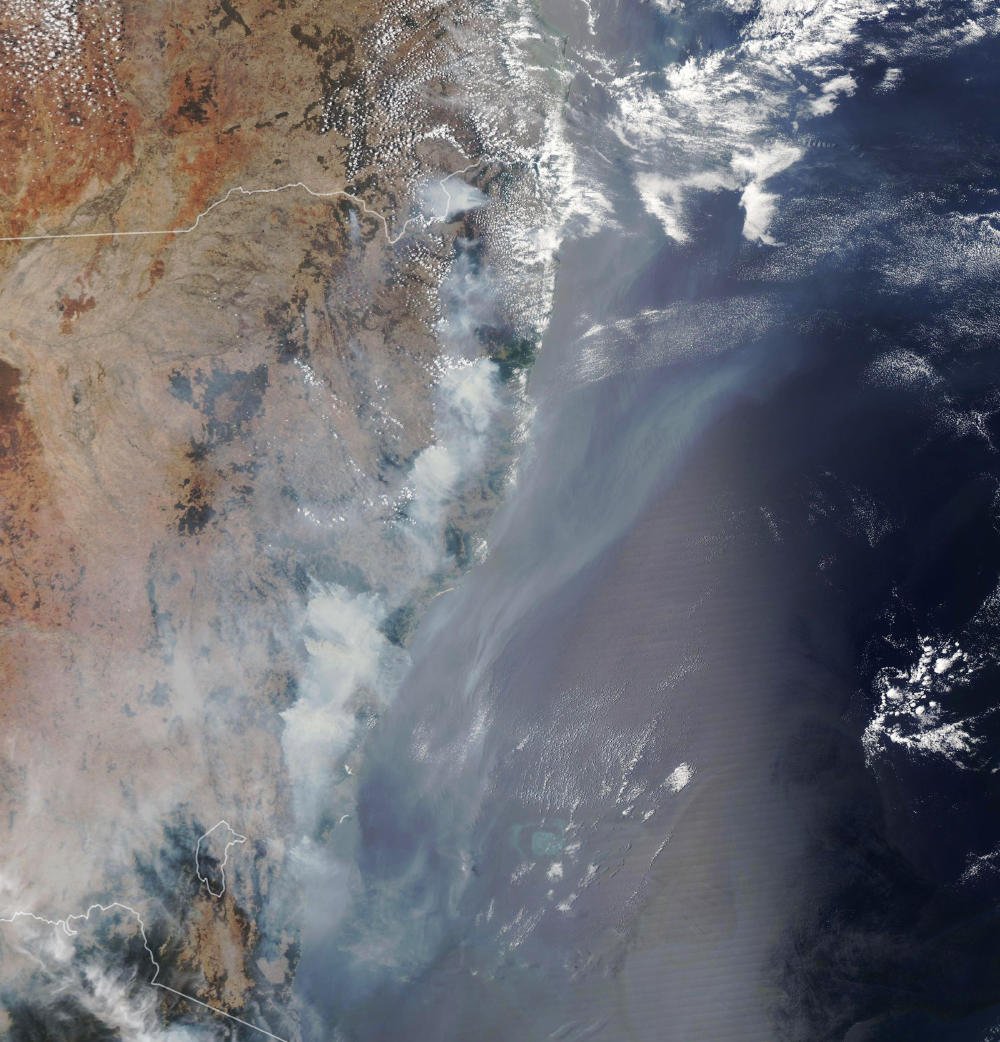 From December 2019 to almost mid-2020 there were extensive fires in the area of New South Wales that had destroyed 27,000 square kilometers. This area sums up the extension of the state of Virginia. the smoke and toxic air from the fires were in the atmosphere for weeks after they were put down. Even very crowded cities like Sydney that has 5 million inhabitants had in those months, crazy pollution levels that made the air hazardous for human life. This is a sight of the Australia Fires from Space: 19 Best Pictures to Understand their Impact.

Australia has very arid vegetation, it is known particularly for its extensive eucalyptus forest, home of the Koala. The fires that lasted for months were a danger not only to the eucalyptus forest, that are prone to catch fire but particularly to the species that called it home. We have to take into account that eucalyptus trees are very flammable, and considering all the factors that contributed to such big fires, the lack of rain was a big one. So the forest was not only naturally prone to fire, the weather conditions made it a perfect scenario for a disaster.

A view of the Australia Fires From Space: Best Pictures

Images from the fires taken by satellites and even astronauts were evidence of the major impact these fires caused. For a fire to be seen from space, well let's just say is not that common.

In the picture above, you can see from space how the flumes from the fires linger in the atmosphere. The smoke from the Australian fires had a particular composition that actually worries scientists. It has high levels of black carbon. Basically, they can impact variation on the weather, though the actual consequences are not known specifically yet. High levels of smoke in the atmosphere (just like in the picture) means chemical changes in the stratospheric ozone. If you want to know a little more about that and its impact on the climate read our post on the Depletion of the Ozone Layer: Impact on Planet Earth

The smoke you see on these pictures actually stayed there for a few weeks, and even months. They traveled with the wind currents for miles and miles away from its source. Maybe that is why so many satellites got to take a picture of them.

Burned areas are highlighted in a dark green color; healthy vegetation is represented in red. It is a heartbreaking image of how much land has been burned.

A picture taken from a satellite from NASA shows smoke from bush fires in southeastern Australia.

Send your help to Animals: Australia Fires: How did it Affect Animals & How Can We Help?

Australia fires and their impact on the environment:

Australia is known for not only having amazing landscapes and adventurous beaches. But also for its rich biodiversity and for being a home for almost 900 native species. It is a very sad fact that 70 natives species from this land had a big percentage of their habitat burned.

Koalas, kangaroos, and wallabies were all affected by the fires. Taking into consideration that most research and census of these facts only take into consideration the most known and almost every time the vertebrates (since they are easier to account for) there is a lot of habitats lost that we don't even know about. Let's think of bees and butterflies for a minute.

Bushfires in Australia are "natural" per se but, the latest fires were exceptional for a few reasons: Number one, the extent of the burn is like no one ever seen before. Approximately 11 Million hectares were burned as of 1 February 2020. That extends of the burned territory is as big as Virginia. Imagine that! The second reason is that the bushfire season started earlier than before, and this time, the fires were concentrated near major population centers, Sydney, and other urban areas had their air filled with smoke.

This is a satellite image of Victorian bushfires. Taken January 11 this picture shows smoke from bushfires streaming out from fires burning. The smokes spread up to 31 miles from the areas burning in the rage. 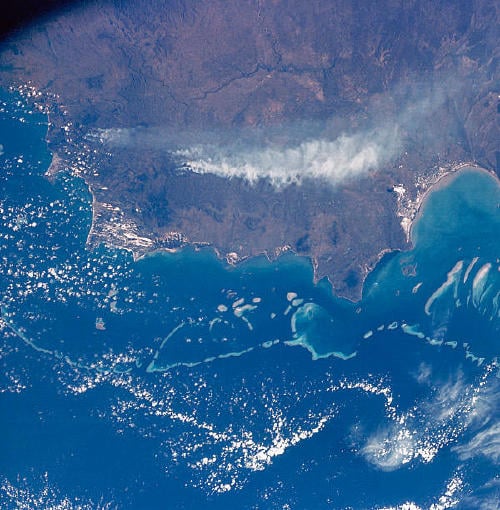 This is an image from Apollo 7 from space. As you can see, the Great Barrier Reef, Cape Melville, and Cape Flattery, of Queensland, Australia have a cloud of smoke that looks like a tail traveling through the wind.

The satellite image of the Australian fires shows wildfires burning in the region of east Orbost. This is a picture taken on January 4, 2020. By now, fires have been happening for a few weeks, the forest is taking a hit and firemen are battling non-stop.

Check this post: What Can We do About Climate Change and Their Effects?

Australia fires from the earth:

The hardy eucalyptus, native to Australia is the favored food of koalas, has an ancient relationship with fire. Scientists have found that in most cases eucalyptuses, commonly known as gum trees, thrive in the continent’s fire-prone environments, having adapted and evolved over 60 million years.

This time though, areas of eucalyptus forests that were fire-resistant have been starved of carbon amid a prolonged drought. That means they are not as healthy, and when fires arrive (which they will), many are dying.

The main ways in which bushfires pose threats to human health are through smoke pollution, degradation of water supplies, and the destruction of major infrastructures, such as power lines to major cities. Hundreds of families were evacuated and a lot of them lost their homes, businesses, and animals. Dehydration and heat exhaustion are both well-recognized health risks for active firefighters and psychological trauma is a huge common feature in firefighters and people who suffered from a loss due to a bushfire. 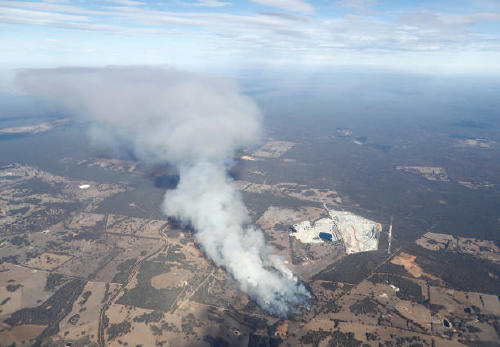 In this aerial view of Perth, where you can see a bushfire threatening homes in The Lakes, Copley, and Wootaing. This picture was taken in May, which means the worst part was over but the problem wasn't solved.

Recovery for Australia is and will be slow. The firegrounds you see below were once covered with forest s of varying species, ages and now they are being replaced with regrowing stands of uniform age. This is a bit problematic since they are vulnerable to future mega-fires. It remains to be seen whether we can restore diversity in vegetation age and fire history to these regions.

This phenomenon awoke interest in indigenous technics to manage fires. The technic involves the lighting of 'cool' fires in targeted areas during the early dry season between March and July in Australia.

The fires burn slowly, reducing fuel loads and creating fire breaks. This way they can get a hold of the naturally caused fires. Firefighters need to be taught these ancient technics for more effective prevention of wildfires in the country.

This picture was taken in North-South Wales in September 2019, fire-related news explored a few weeks after this around the world. In the picture: smoke covering wide areas from fires around Shark Creek.

In the picture, a line of fire was drawn by a bushfire in the valley of the Blue Mountains. This bright red color that you see is the burning of the eucalyptus forest.

Given Australia's warming climate and its fire-promoting vegetation, eliminating fire from Australia’s landscapes is an ecological impossibility. Instead, we need to minimize its harms by learning how to live with, and how to manage fire. Well-designed longitudinal studies are crucial for understanding the health impacts of bushfires and, given the recurring nature of these disasters, should be a priority for Australia and around the globe.

The United States, the world’s second-largest emitter, and Australia, the world’s largest exporter of coal, should cut their carbon footprints. In doing so, the countries can play leadership roles to keep global temperatures from rising to unmanageable, dangerous levels.

Hopefully, we can learn from Australia's terrible experience and try harder to work towards a more sustainable way of using nature.